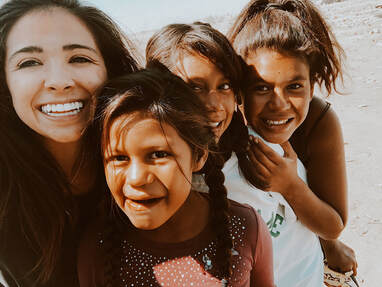 “ You can choose to look the other way but you never again can say you did not know”. – William Wilberforce

Ever have a moment that stops you in your tracks and you know your life just changed? Maybe it was when a baby was born, when you meet your life partner, you get a phone call that changes everything, you get or lose job you love.

For me, it was Thursday, October 3rd, 2019.  That day I knew my life wouldn’t be the same ever again.   Back track to August 2018. I was in Mexico with @caringheartsmexico and a team of my best friends came down with me to help build a house for a woman I love with all my heart. Her name is Isabel, she cooks for our teams who come down to San Luis.  The land lot she bought was in a part of the city near the city dump, where people live and work. The area is underdeveloped, with water and electricity still scarce.  The house beside her lot was a home where gang members/ drug addicts live. They run drugs in and out of the house that looks like something out of a horror movie, just piles and piles of garbage.

I will never forget my fear for Isabel.  Every day we would build, and every day the neighbors would steal what we build overnight. Taking down the wall framing and stealing the wood. I was desperate to talk to the men. But I promised all my fellow staff that I wouldn’t, since it was too dangerous.

One day, I was standing on the dirt road on the phone while the team was working. My gaze was on the house.  I saw a little girl peak out from being a pile of garbage. I waved at her. She ran to me. 2 other older girls came running out after her.  I hugged them all. The mom ran out and we began to talk. I asked her if they were safe and she said no, but the only way they could eat and have somewhere to sleep is if they “stayed” with the men.

The next day I picked up the girls and brought them to our soup kitchen to play for the day. They were so thankful.  Sweet, kind, innocent girls, we we knew had seen and experienced too much.

I lost contact with the girls. They were not at the home when I went back.

Fast forward to a year later, August 2019.  One night our team was going to the dump where Caring Hearts gives clean water and ice to those who live and work there. The dump had been lit on fire, burning a section of the garbage so there was alot of smoke. I left the team by the car as a few of us went out to tell the people there that we had come to give out bags of beans and some clean clothes. As I am walking, I see my friend Jillan holding the hand of a little girl. She yelled my name and ran to me. It was Jemimah, the little girl from the house. Her two sisters were not far behind.  My heart broke.  After the program I asked if I could see their house. They innocently and proudly took me to their “house”.  Sticks, string and blankets on a pile of garbage. There was a man in there. I shook his hand. I asked him if I could help his girls. He replied “you can have them if you want”.  I had to leave because I had no where to take them. Legally if I took them it could be kidnapping.  The next day we sent one of the staff to go look for them. They were no where to be found.

Then, a month later I came with a team. We went into the dump. I got out of the van and saw my 3 little girls standing at the top of the hill. They screamed my name and came running to me. We sat and talked. Their skin was black with dirt. Only one had on real shoes, and they were too small. Their clothes were torn. Their hair matted.  Jemimah had a cut on her leg. Flies were crawling in it and she didnt even notice. She grabbed my hand and smiled. Naomi, the oldest, gave me a bracelet she had found. I gave her my hair tie in exchange.  Jemimah tapped me on my shoulder and said, “do you have a house?” I said yes. She said, “ Do you have a mom?” I said yes but she doesn’t live at my house.  She said “me too, my mom left us” I hugged her. She said “Can I live at your house?”.   I walked back to her “house”, the hut made in the garbage. I asked her dad if I could pick them up in the morning. He said yes. At 9 AM I pulled into the dump and they were waiting. They got in my car. We went to Oasis boys home and they came upstairs to the missionary house where the team was. They were shy. When I told them they could take a shower and I gave them a bag of toiletries I bought, their faces lit up. They showered, ate cereal and came to church. They were just like the other kids, singing playing laughing.  When I took them back after church, they didn’t want to leave. Naomi, the oldest asked me if they could live with me. I said I didn’t have a place for them to live with me, but that I knew of a safe place they could go. I asked if they ate every day, they said sometimes. I asked if they go to school. They said no.

On Monday, I went to the City Child Protective services, the DIF. I told them the story. They said they would call me. They never did.  On Thursday I went back to the DIF. I said I would wait there until someone came with me to get the girls from the dump. Two workers went with me after an hour of waiting. We drove into the dump. I got out and told them it would be a 5 minute walk to the hut, and they said they would wait in the car. They didn’t want to get their shoes dirty.

After a few minutes of walking, I saw Naomi. She lit up, she turned around, ran to get her sisters and they ran to me and jumped on me.  Jemimah put a dirty necklace around my neck.  She said she was waiting for me, she wanted me to have a necklace so every day I remember her.  I told them I had two friends with me who could help them. We walked back to the car and when we got there, the DIF workers got out and immediately started snapping photos of them.  They hid and Naomi started to cry. She had been taken by the DIF before to an orphanage where she was abused. She said she ran from it and thats why they live in the dump.  Jemimah grabbed my hand and cried. This is the moment that broke me.  I had no option. Leaving them in the dump meant a life of abuse neglect and danger.  But If I took them to the DIF, there was not a safe home for them to go. They would be in an orphanage run by the city with 80 or more kids, or taken to the other orphanage where they would be abused.  Naomi and the girls ran and hid.  I talked to their dad. He promised to bring them to the DIF on Monday at 9:30.

Driving away from the dump, sitting helpless in the back of the DIF car. This is the feeling I had that my life wouldn’t be the same. That I no longer have the option of living a life without the knowledge that there are 3 little girls sleeping and hiding in a garbage dump and that there is no place in San Luis to truly help them.  Something has to change.

On Monday, he didn’t show up.   I was back in Nashville but I already knew that there was nothing that would stop me from helping them. I asked the DIF what would happen, they kept saying they would get the girls but no one was making progress.  Monday to Thursday I checked plane tickets daily.  I felt sick. My loved ones who I vented to said “you did all you can do”. I knew we could do more.  If I was in a garbage dump, someone would come for me.

On Thursday I called Angellica, one of our staff in Mexico. I explained to her where they were.  On Friday, I got a FaceTime from Angellica… with the girls! They were in the car, on the way to live with dear friends of Caring Hearts, one of the Mexican board members and his wife. They are now our first Caring Hearts foster family.

This is the start of something new.  Today, we start planning and raising funds, doing research, and getting ready for a shelter for girls.  Today we start to decide that it is unacceptable for young girls in Mexico to be told that they don’t get the basic necessities of life due to the situation they were born into. Today we start to fight so the girls in Mexico have the freedom to be leaders, chase their dreams, and live their purposes out.

We need your help!  We can’t do this alone. If you are interested in being a part of helping the young women in Mexico, email missions@caringheartsmexico.org to be a part of the dream and mission.